2. Everything you've always wanted to ask ...

Sign language, is that a real language? Yes. Actually, it is not one language, but many. Each country has its own national sign language and in some countries, more than one sign language.

No. Sign languages originated in communities of deaf people, but now probably more hearing than deaf people learn or use a sign language. Some reports state that American Sign language is now the fourth most taught second language in the USA.

Is sign language universal, is it an international language?

Hearing people often say: “Wouldn’t it be much easier, if all sign language users used the same sign language?”

Many people do. Children who are born in families where sign language is used, learn sign language naturally, in the same way that hearing children acquire the spoken language of their parents. Relatives, friends, colleagues of deaf sign language users often learn to sign. People may learn to sign for their job, for instance to work as a sign language interpreter. In some countries, sign language can be learned in secondary schools and at universities, as a second language.

Learning a sign language is different and exciting: you learn to express yourself without using your voice. Instead, you use your hands, face and body.

In the past, sign language, or a form of ‘sign supported speech’ was taught by hearing people, often the clergy. In the second half of the last century, deaf people claimed their language and started to teach sign language, themselves. Most of them however had not been trained as a teacher; in most countries, each teacher developed his/her own materials and curriculum.

In some countries this has changed in recent years, and sign language is again taught by hearing teachers. One of the objectives of the SignTeach project and this report was to find out more about these changes.

Can you compare sign languages to spoken minority languages?

Another important difference: most sign language users did not, and in many cases do not, acquire sign language from parent-to-child but from peer-to-peer interaction, or by explicit instruction.

For many deaf people, a visual sign language is the only language that is 100% accessible. This means that sign languages are not only the preferred language of most deaf people, they also constitute a ‘reasonable accommodation’ that makes it possible for deaf people to realize their human rights — civil, political, economic, social, cultural—and to participate on an equal basis in society (United Nations Convention on the Rights of Persons with Disabilities, 2006).

According to Ethnologue (www.ethno-logue.com) most European sign languages are ’developing’ languages (status 5), which means “The language is in vigorous use, with literature in a standardized form being used by some though this is not yet widespread or sustainable.” Yet in some European countries, for instance in Iceland, sign language has the status of ‘threatened’: “The language is used for face-to-face communication within all generations, but it is losing users.” From ’developing’ language to ’threatened’, or vice versa?

Would it be so terrible if sign languages become extinct?

What can you do?

Please read this report. Please forward it to colleagues, policymakers, everyone you know, to help us disseminate our message.

Please read this report. Use the information in this report and on the website to become a better, more professional sign language teacher. Learn from the good examples. Use this report and the SignTeach website as a launching pad for national and transnational collaboration. 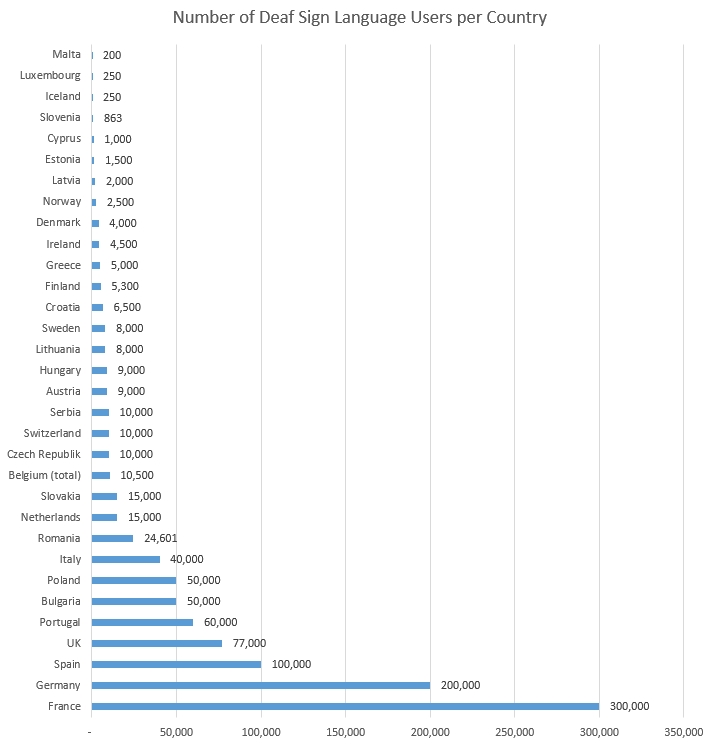