The Sign Language of the Netherlands (SLN or in Dutch: NGT) has been used for centuries, but wasn’t researched and re-cognised as a language until the 1950’s. The first sign language dictionary was not published until 1988. Until that time, sign language teachers were deaf people who had had no training in teaching a sign language and who developed their own materials.

One of the first teachers of sign language in the Netherlands was Wim Emmerik. When he started in 1977 he insisted that he taught pantomime, not sign language. In those days, sign language was used within the Deaf Community, but it was not taught to hearing people. Later, Wim Emmerik became an internationally known sign language poet.

Other deaf sign language users followed Wim’s example and started teaching the Sign Language of the Netherlands.  At first, they taught hearing professionals:  parent counsellors, teachers, social workers. These professionals would then teach the signs, usually as ‘Signed Dutch’, to parents of young deaf children. Signed Dutch uses signs to ‘support’ or ‘visualize’ spoken words. It is not sign language, the speaker uses voice and the word order of the spoken language.

In the beginning, there were many discussions about the question whether deaf people could be allowed to teach sign language to hearing parents of young deaf children—who usually had had no previous contacts with deaf people, or sign language. How would they communicate?
Things changed fast. Deaf people became more aware of the importance of their own language and began their continuing struggle for equal rights and recognition of their language and culture. More and more research showed that sign language did not harm deaf children, but was, in fact, crucial for their language, cognitive and last but not least: social-emotional development.

By 1995 all schools for the Deaf in the Netherlands were officially ‘bilingual’. Teachers used the Sign Language of the Netherlands as the language of communication and instruction in the classrooms. Deaf teaching assistants and deaf teachers made their entrance and became role models, both for the children and the hearing teachers. Dutch was taught as a second language with the main focus on reading and writing.

As a result of these developments, the demand for sign language courses for parents, teachers, and then sign language interpreters grew rapidly.

In 1988, deaf people in the Netherlands obtained the right to a sign language interpreter—for a limited number of hours per year. This eventually led to the establishment in 1998 of a four-year interpreter training programme—and more demand yet for sign language teachers, sign language curricula, sign language dictionaries and learning materials.

In 1998 the Institute for Sign Language and Deaf Studies of the Hogeschool Utrecht started the only 4-year training programme for sign language teachers and interpreters in the Netherlands. It is a formal Bachelor training programme (B.Ed) with regular entry requirements. In 2004, a Master programme (M.Ed) was added.

There is no registration of teachers who graduate. In the Netherlands, anyone can call him-/herself a sign language teacher. When people look for a sign language course, they often don’t know if the teacher will be deaf or hearing, or what training he or she has had.

The Dutch Sign Centre has developed curricula, learning materials and an e-learning environment for sign language courses for different target groups (parents, teachers, general public) and different levels. The curricula have recently been updated to take into account CEFR developments.

Schools for the Deaf use a special curriculum, developed to teach the Sign Language of the Netherlands to deaf children.

Several independent sign language teachers have developed their own commercial curricula; some of these are for special target groups or based on a specific methodology for spoken L2 teaching (e.g. TPRS by Gebarentaal voor Iedereen, in English: Sign Language for All).

The National Organisation of Language Teachers has a section for teachers of sign language; however, the section only has a limited number of members and has not been very active in recent years.

A major incentive for this struggle was the resolution of the European Parliament in 1988, with its call on the Commission to make a proposal to the Council concerning official recognition of the sign language used by deaf people in each Member State; and its call on the Member States to abolish any remaining obstacles to the use of sign language and to support pilot projects aimed at teaching sign language to hearing children and adults, using deaf people trained for the purpose and to back research in this area.

Recognition of the Sign Language of the Netherlands however, has proved difficult, as not even spoken Dutch is enshrined in federal legislation. Despite a lack of official legal recognition as an independent language, sign language is mentioned in educational and care legislation.

Back to the beginning?

Many things have changed, but in some respects it seems as if we’re back where we started, 40 years ago:

What we don’t know: is this the way forward (or backwards?) for all European countries, or is the Netherlands an exception?

What we do know is that all Dutch respondents, as well as the experts who we interviewed, agree that more collaboration is needed, both nationally and internationally. 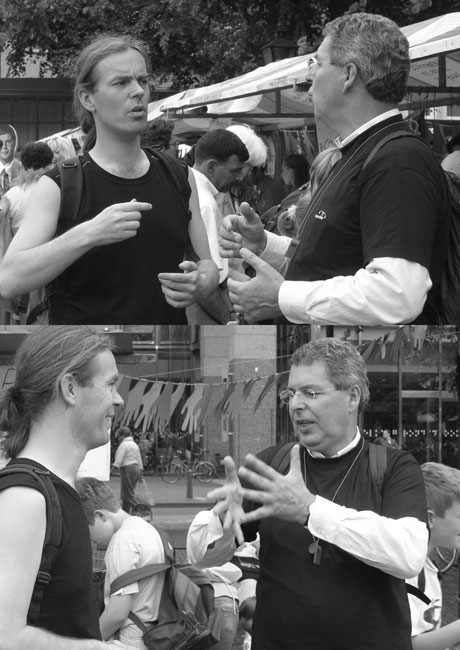