Long before there was reliable knowledge about DGS and sign language research in Germany, signing courses (“Gebärdenkurse“) existed. Until the end of the 1980s, hearing participants of such courses learned a form of “Signed German”, now referred to as “Laut-sprachbegleitendes Gebärden” (LBG, signs accompanying speech), that is, they learned how to speak and more or less consistently use manual signs at the same time.

Teachers of these courses were often hearing children of deaf parents. A long-time teacher of such classes was Manfred Wloka, teacher and later headmaster of the Deaf School  in what was then West-Berlin. As the son of deaf parents he had grown up with sign language. Looking back, he remembers the beginnings of his activities:

“The impetus for my first sign language course in the autumn of 1976 came from parents of deaf children who kept saying over and over again: “We are completely helpless, we stand outside the community of deaf people, and when our children bring home friends, we understand nothing. We would like to learn how to sign.” (Wloka 2001: 227 – our translation)

Apart from teachers of the deaf and  hearing children of deaf parents, most of whom also worked as interpreters at the time, there were a few deaf people with good oral skills who also taught such "Gebärdenkurse".

Completing an LBG course went some way towards enabling hearing learners to communicate more or less successfully with deaf people, provided that the content of the conversation did not go beyond the scope of everyday subjects.

However, Signed German did not allow for relaxed and fluent communication, in particular because hearing learners could not follow the silent and spontaneous communication that is usual among deaf people.

In terms of teaching materials, signing classes almost exclusively relied on the few collections of signs available at the time, such as the dictionary of signs generally known as the “Blue Book”, a collection of signs published in 1977 by teachers of the deaf Hellmuth Starcke und Günter Maisch. Their volume was widely used in the years after its publication, until it came to be increasingly criticized for the inclusion of many “international” signs alien to the German Deaf community and eventually replaced.

This grass-root movement was highly motivated by the growing awareness of sign languages as true languages spreading all through Europe by this time1. Deaf people actively involved in this empowerment wave had a lasting influence on the character of "Gebärdenkurse".

Instead of earlier LBG courses, which were designed to teach hearing people how to accompany their spoken lan-
guage by manual signs in order to communicate with or, rather, talk to deaf people, deaf teachers now addressed their courses to hearing participants as learners of a foreign language. Exercises in nonverbal communication, a visually-oriented curriculum focusing on sign language grammar, facial expressions, manual parameters, and spatial dimensions became central.

Sign language units such as classifiers, verb modifiers, and locations were the new focus of attention. These new courses came to be a great attraction to hearing learners. In the learners‘ minds, the awareness grew that they were facing a fascinating language of its own that provided access to a vibrant culture, not just a set of manual cues to be used as an aid to facilitate communication with a group of disabled people. 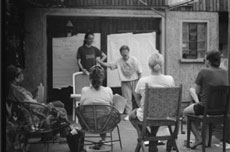 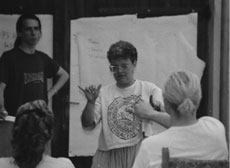 However, the Deaf community was not adequately prepared for the great interest hearing people took in learning this new language. The growing demand for DGS courses raised many questions and at times caused considerable problems.

As in the 1970s in the USA, sign language courses in Germany were increasingly taught by Deaf people who were happy to teach and often embraced this as a challenge and a vocation, but often they did not know enough about the language they were supposed to teach nor did they have a background in teaching or even learning foreign languages.

Research in sign languages and especially DGS had only just begun, the lexicon and grammar of DGS were only inadequately documented at the time. Pioneering sign language teachers did not have access to teaching concepts and teaching materials. The BAG was on the lookout for training materials and invited Deaf lecturers such as Gilbert C. Eastman (USA), Frances Elton (UK), Christa Ekholm (Sweden) or Margarita Navas Sánchez (Spain) to Germany in order to gain insights into international work done by sign language instructors.

Important input also came from the deaf lecturers working at the “Zentrum für Deutsche Gebärdensprache” (Hamburg University), who reported about their experiences as university lecturers in workshops and gave important advice for teaching nonverbal communication and DGS.

The BDG sees itself as representing the interests of all full-time and free-lance sign language teachers in Germany. At the heart of the association’s work is the exchange of experiences in teaching sign language teaching, mainly offered to adult hearing L2 learners.

In recent years, however, DGS teaching methods have become increasingly important as part of early childhood intervention for hearing-impaired children and in the context of establishing sign language as a subject in deaf schools.

In 2004, the BDG developed an occupational profile, and in 2014 a special code of practice was set up to ensure “the reputation of the profession and safeguard the interests of the Deaf Community”. The code obligates the BDG’s members to participate regularly in continuing education and advanced training, and it encourages its members to acquire a qualifying degree, as it is offered in the form of a state examination by the Bavarian Institute for the Promotion of Communication for People with Hearing Impairment (http://www.giby.de) and by the Hessian Teachers' Academy (Hessische Lehrkräfteakademie). However, as yet, there exists no basic professional training for sign language teachers in Germany. Sign language teachers seeking professional qualification depend on isolated further training measures or part-time courses, as they are currently offered at the University of Hamburg and by the Bavarian Institute.

The development towards a new breed of deaf sign language instructors who confronted hearing learners proudly and confidently with their language and culture essentially took place within a larger movement that led to growing self-esteem and empowerment within the German Deaf community.

Though in effect sign language classes became proper language learning experiences, relationships with more conventional foreign spoken language teaching were explored only much later. Over the years, the following three teaching concepts turned out to be of particular influence and relevance for deaf sign language teachers looking for guidance and materials:

When the first academic training for sign language interpreters started at the “Zentrum für Deutsche Gebärden-sprache” in Hamburg in 1993/1994, lack of a professional and application-oriented DGS teaching concept became evident. As a consequence, a project was initiated which was to develop a DGS course based on the format and methods developed for the well-known ASL-teaching programme “Signing naturally” (Smith et al. 1988). “Signing Naturally” was adapted in form and content to the cultural and linguistic characteristics of DGS and the German Deaf community.

As the American model, its German version emphasizes direct and lively communication methods. Since the course focuses on language functions and communication and is not primarily based on a systematic exposition of linguistic structures, many sign language lecturers have criticised the lack of a well-founded grammar which would allow for didactically oriented, structured grammar lessons. Notwithstanding this criticism, the "Grundkurs Deutsche Gebärdensprache", which is now available in two volumes with extensive additional materials, is the most successful and widely used DGS teaching concept in Germany.

The teaching concept developed by the sign linguistics team of the University of Frankfurt is a good and useful addition to the “Grundkurs Deutsche Gebärdensprache”. The Frankfurt concept was created in the year 2000. It consists of ten lessons which are predominantly based on the grammar translation method, a synthetic-deductive method of foreign language teaching which provides a systematic and rule-orientated approach to language learning. DGS is taught as a foreign language, introducing the units and rules of the language step by step in a grammatical order. The acquisition of communicative competences, on the other hand, is backgrounded in this approach.

The third teaching concept which has enjoyed widespread use among Deaf sign language teachers was published by the DESIRE-Team (Deaf and Sign Language Research) of the RWTH Aachen University. It offers many grammar-oriented lessons  but, differently from the Frankfurt concept, it is not a traditional grammatical approach. In four volumes, the Aachen concept offers a comprehensive training course for DGS, characterised by highly detailed course planning of individual teaching hours. It offers suggestions for teaching methods, didactic instructions and theoretical background information concerning linguistic issues. There are also ready-to-use slides and suggestions for texts and drawings to be used on blackboards. The concept serves both teachers and learners and is appreciated for its practical orientation and usefulness.

Research activities that focused on sign language began in the 1980s (see Prillwitz 1982, Ebbinghaus & Hessmann 1989). In 1987, the “Center for German Sign Language”, today’s Institute of German Sign Language and Communication of the Deaf, was founded at the University of Hamburg (https://www.idgs.uni-hamburg.de/en.html).

Over the last 30 years, confidence and self-awareness of the German Deaf community have grown significantly and deaf people clearly recognize the central role that sign language plays in their lives. However, public use of German Sign Language (Deutsche Gebärdensprache, DGS) is still limited and the language is not applied with any consistency in schools, vocational training and employment.

The 2002 Act on the Equality of Persons with Disabilities (Bundesgleichstellungsgesetz) is generally regarded as a breakthrough for the official recognition of DGS, but it is limited in application and it is couched in terms of traditional disability legislation.

While DGS is expressly recognized as an independent language, it is seen as just one of a number of communication tools to be applied in the rehabilitation of disabled people, not as the language of a bilingual and bicultural community.

Still, on the basis of legislation of this kind, the provision of sign language interpreters has improved and Deaf people have increasingly been enabled to exercise their rights and gain access to administrative proceedings and other social processes, though regulations remain ambiguous and inconsistent. To give just one example: A deaf woman who experiences domestic violence and seeks counselling will have a hard time in trying to claim financial support to provide for sign language interpreting services. The 2017 Federal Participation Act (Bundesteilhabegesetz), Germany’s attempt at implementing the regulations of the UN Convention on the Rights of Persons with Disabilities, provides no general solution to this problem.

For the German situation, the following tendencies with regard to the teaching of sign language are characteristic:

(1) For a personal account of these developments by one the important deaf activists of the time see Gertrud Mally on “The long road to self-confidence of the Deaf in Germany”, in Renate Fischer and Harlan Lane, Looking Back: A Reader on the History of Deaf Communities and their Sign Languages (Hamburg: Signum, 1993), pp. 177–198. 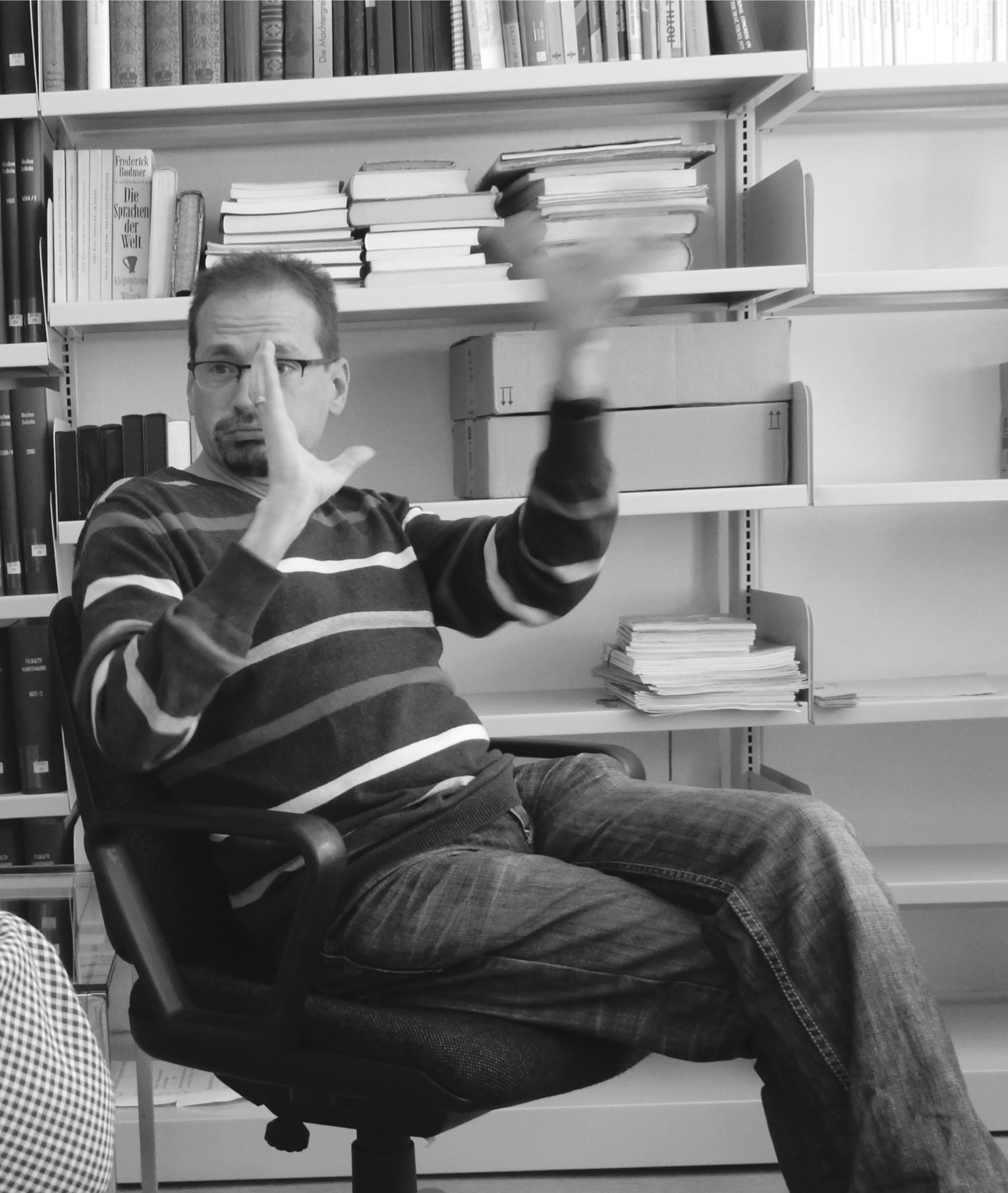